GIST My Relationship With Kiss Daniel Is Not For The Public To Know – Singer, Chidinma 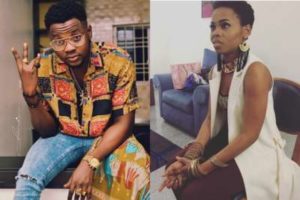 Singer, Chidinma who has been rumored to be dating Kiss Daniel, has come out to address the trending topic. She said her relationship with the Flyboy INC proprietor, is not for the public to know, at least not for now.

Speaking on the topic during an interview with Punch NG, she said;

“I don’t like to speak about my relationship or love life in public. There is nothing to talk about me and Kiss Daniel; people can say anything they want to say. Whether I am in a relationship with him or not, everyone will get to know later. I find it weird that I am always linked to one musician or the other. At times, it takes extra effort for me to convince people that certain reports about me are untrue.”

She spoke on other topics relating to her music journey, her future projects and her relationships with other male singers.

On Project Fame she said;

“I was excited to be the first female to win Project Fame in 2010. During the show, I was asked if I thought a girl could win and I said yes. I didn’t want a guy to win that edition of the competition; I was rooting for either me or Yetunde to take the prize home.”

About her break from the music scene, she said;

“It is true that I have not released music for a while. I just felt the need to take a break in order to restructure and to be sure of the kind of music I should put out. I also needed to form a team after leaving Capital Hill Music.”

She also spoke about her exit from Capital Hill Music.

“Leaving Capital Hill Music was not an easy decision for me to make because we were like a family. However, change is constant and I needed to move on.  I miss the friendship, the laughter and fun. I didn’t have issues with the company; my contract expired and I decided not to renew it. I have my own record company now, Fortified Music. Initially, it was not easy for me to manage all the responsibilities that came my way but things are getting better now as I have a team working with me. I am the only artiste presently signed to the label, but there are plans to sign artistes”, she said.

Chidinma spoke on her current projects.

“My new song, Love Me, was produced by Oscar. The inspiration came up when we were talking about love in the studio; it is not a personal experience. I just released the video of the song and the reception has been awesome.”

She had this to say about Flavour;

“I was never signed to Flavour’s record company and I wasn’t in a relationship with him. However, I have been involved in some projects with him because we have a good chemistry. Working with him is fun and less stressful.”

Then she concluded the interview by sharing her joy of winning at the KORA Awards. She said;

“Winning the award meant a lot to me and it made me more popular in other African countries. A lot of things changed for me after winning KORA. It even came at a time I didn’t think I could win such a big award. That is one thing I will always be grateful to God for.”